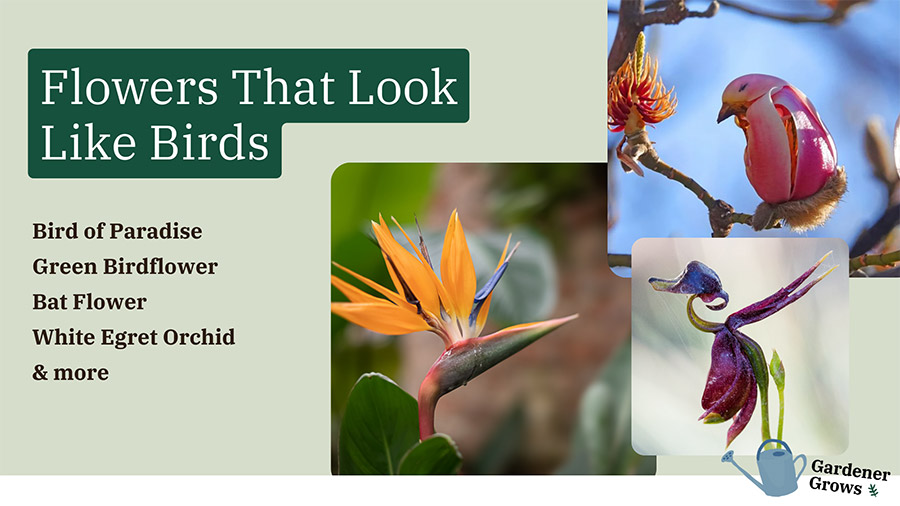 When you think of flowers, birds likely aren’t the first thing that comes to mind. But there are a surprising number of flowers that look like birds. From the striking Bird of Paradise to the surprising Green Birdflower, these flowers are sure to add a touch of whimsy to your garden.

After a good amount of research, I’ve compiled a list of some of the most bird-like flowers out there. Some I couldn’t even believe were real! Check out the list below and see for yourself. I’ve also included their bird look-alikes in the same photos.

The Bird of Paradise is one of the most well-known flowers that looks like a bird. Bird of Paradise (bird) is a striking bird with a long beak and vibrant plumage. The flower of the same name is just as eye-catching with its orange, blue and yellow petals.

Bird of Paradise is a native of South Africa and is also known as the Crane Flower or Strelitzia. It’s a popular choice for tropical gardens and can even be grown indoors in pots. Indoors, they will need bright light and consistent watering to thrive and you might be lucky to see its flowers that look like birds of paradise.

This was one of the most surprising flowers on our list. The Green Birdflower (Crotalaria) is a small, unassuming green flower that resembles a bird in flight. Green Birdflower is a native of Australia and is part of the pea family. It gets even more interesting when you learn that the Green Birdflower is also known as the Rattlepod. That’s because the seeds of this plant rattle when they are mature and ready to be harvested.

Green Birdflower is native to Australia and grows in deserts, coastlands, and woodlands. It’s a low-maintenance plant that is perfect for gardeners who don’t want to spend a lot of time caring for their flowers. While Green Birdflower looks like a delicate little Humminbird, it actually doesn’t attract hummingbirds or any other nectar-seeking birds. Instead, it relies on bees and other insects for pollination.

The Bat Flower is a unique and unusual flower that looks like a bat in flight. While a bat is not a bird, we still thought it deserved a spot on our list. The Bat Flower is native to southeastern Asia and gets its name from its large, black petals that resemble a bat’s wings.

This flower is also known as the Devil’s Flower and the Black Bat Flower. It’s a member of the genus Tacca, which contains a number of other interesting flowers, including the white bat flower and the yellow bat flower. But none of those look quite as much like a bat in flight as the black bat flower.

I couldn’t believe my eyes when I saw the Parrot Flower – it just doesn’t look real! The Parrot Flower is a beautiful flower that resembles a parrot. It’s native to Southeast Asia and Thailand and is also known as “parrot balsam” or “impatiens psittacina”.

This flower is a member of the genus Impatiens, which contains over 1,000 species of flowering plants. The Parrot Flower is a popular choice for gardens and is known for its ability to bloom in shady areas.

Parrot flower, not surprisingly, is named after its similarity to a parrot. Particularly “flying cockatoo” as described by the great British botanist Joseph Dalton Hooker. The scientific name of the plant, impatiens psittacina, also comes from the Greek word for parrot, “psittakos”.

Another flower that has its name after its resemblance with parrots is “parrot’s beak” or “lotus berthelotii”. This might be less of an obvious resemblance, but if you take a closer look at the shape of the petals you can definitely see how it got its name.

This flower that looks like a bird is a member of the legume family, which also includes beans, peas, and peanuts. Parrot’s beak is native to the Canary Islands but nowadays you will find it in gardens all around the world.

The White Egret Orchid is a beautiful flower that looks like a white egret in flight – it has long, thin petals that resemble a bird’s feathers and a large, yellow center that looks like a bird’s head. It’s native to South America and is a member of the genus Epidendrum, which contains over 1,000 species of orchids with some of the most beautiful and unique-looking flowers in the world.

This flower is pollinated by bees and hummingbirds and is a popular choice for gardens and floral arrangements. While the White Egret Orchid looks very fragile, it’s actually quite hardy and can withstand a wide range of temperatures and climates.

Another orchid that looks like a bird is the Flying Duck Orchid. As you can probably guess from its name, this orchid resembles a duck in flight. It’s native to Australia and is a member of the genus Caleana, which contains a number of other interesting orchids, including the Naked Man Orchid and the Swaddled Babies Orchid. Yes, they are all real flowers and are definitely worth a Google search! I promise you won’t be disappointed.

The Flying Duck Orchid is pollinated by male sawflies, which are attracted to the floral scent and the promise of a meal. The sawfly actually mistakes the flower for a female sawfly and attempts to mate with it. While this may seem like a foolish mistake, it’s actually an important part of the flower’s pollination process. Insects are then trapped inside the flower where they pollinate the plant as they struggle to escape.

Yet another orchid that looks like a bird is the Bird Head Orchid. While from a distance this flower may just look like a weird-looking orchid, if you take a closer look you will notice that the center of the flower resembles a bird’s head.

It’s native to Madagascar and is a member of the genus Pterygodium, which contains a number of other interesting orchids. Bird Head Orchid is also often grown as a houseplant and thrives in sunny, humid environments. You can even easily buy it online, for example, on Amazon.

If you’re not already tired of looking at orchids that look like birds, then you’ll be happy to know that there’s one more – the Dove Orchid. As you can probably guess, this orchid resembles a dove. It’s native to Central and South America and is a member of the genus Peristeria, which contains over 50 species of orchids.

The Dove Orchid is pollinated by bees and hummingbirds and is a popular choice for gardens and floral arrangements. It’s also the national flower of Panama, where it’s known as the “flor de mayo” or “flower of May”.

Yulan Magnolia is a beautiful tree that blossoms with large, white flowers that look like birds sitting in the branches. This tree is native to China and Japan and has been cultivated for over 1,000 years. The flowers of this tree are said to represent purity and innocence.

The Yulan Magnolia is a popular choice for gardens and landscaping and is praised as one of the most beautiful types of magnolias. While the flowers are beautiful, they are also very fragrant and have been known to attract bees and other insects.

Red Birds in a Tree

Yes, this is an actual name of a flower. Red Birds in a Tree is a type of hibiscus that is native to China and Taiwan. It gets its name from the fact that the flowers look like little red birds sitting in a tree.

This hibiscus is a popular choice for gardens and landscaping due to its unique appearance. It’s also a fairly easy plant to care for and can be grown in a variety of climates making it a great choice if you’re looking to decorate your garden with flowers that look like birds. They are also real hummingbird magnets and are often visited by these little birds in search of nectar.

Last but not least, we have another orchid. The Western Bearded Greenhood is a type of orchid that is found in the western United States and Canada. This orchid gets its name from the long, green “beard” that hangs down from the center of the flower. This beard is actually a type of pollen-containing sac used to attract bees and other insects for pollination.

It’s really an odd-looking flower, just by looking at it you can’t even tell that’s a flower, especially an orchid. Western Bearded Greenhood is often found in wooded areas and prefers shady, humid environments making them difficult to spot in the wild.

I really dug (gardener’s pun intended) the whole wide web to bring you the closest bird look-alikes in the plant kingdom. Did I miss any flowers or plants that look like birds? Let me know in the comments below and I would happily include them on this list.