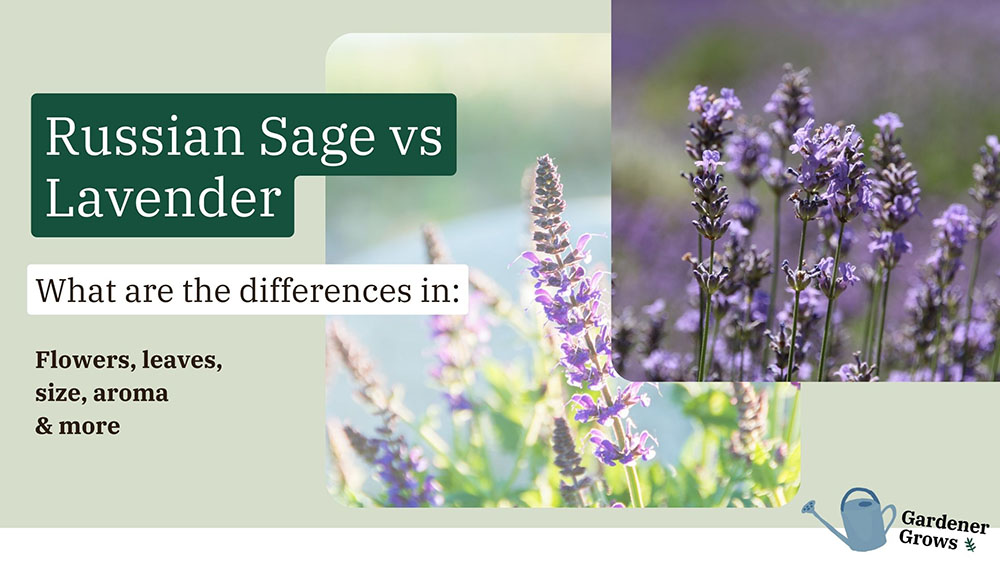 Russian sage and lavender are two popular herbs that are often confused with each other. While they both have a pleasant aroma and beautiful purple-ish flowers, there are a few ways to tell them apart.

If you’re trying to figure out how to tell the difference between Russian sage and lavender, this article will break it down for you.

A quick overview of the differences between Russian sage and lavender:

We will look more in-depth at the differences and similarities between Russian sage and lavender later in this article. I’ve also added some photos to help clearly illustrate the differences.

But first, let’s quickly go over some facts about both of these plants.

What is Russian sage?

Russian sage, also called Perovskia, is a perennial herb that is native to steppes and hills of southwestern and central Asia. It has green, lance-shaped leaves and blue or purple flowers.

It has a long history of use in traditional medicine, and is still used today for a variety of purposes, including as a tea, tincture, or infusion.

Lavender, also called Lavandula, is a perennial herb that is native to the Mediterranean region. It has narrow, hard leaves and purple flowers.

As you might already know, Lavender is one of the most popular herbs in the world and is widely used for a variety of purposes, like aromatherapy, cosmetics, and herbalism.

Now that you know a little bit about Russian sage and lavender, let’s go over the differences between them.

While the Russian sage and lavender flowers might look similar at first glance, there are some distinct differences.

Flower color is one of the ways to tell these two plants apart. Russian sage flowers are blue or purple, while lavender flowers are typically purple, but can also be white, pink, or blue. So in some cases, it might be easy to tell them apart just by the color of their flowers.

The location of the flowers is not the same – Russian sage flowers start forming in the center of the plant, while lavender flowers are located on the ends of the stems.

However, the main difference is in the width of the plants. Overall Russian sage gives more of a bushy appearance, while lavender has a more spindly look.

Russian sage plants are typically wider so if you’re looking for a plant in your garden that is going to get a little bit bigger, Russian sage is the way to go.

Are you standing in front of a purple-flowered plant and can’t seem to distinguish whether it’s lavender or just a plant similar to lavender? All you need to do is to smell it!

The aroma of these plants is a key way to tell them apart. Russian sage has a light herbal scent, while lavender has a sweet, floral aroma. If you’ve ever smelled lavender before, you’ll know what we’re talking about.

After all, because of lavender’s sweet and floral aroma, it is often used in aromatherapy, while Russian sage is not.

Here it actually depends on the species of lavender. Some lavender species like English lavender can handle colder temperatures and are hardy in zones 5-8, which overlaps with Russian sage that prefer zones 4-9.

However, most lavender species cannot handle as cold of temperatures as Russian sage and are only hardy in zones 5-7. So if you live in a colder climate and trying to decide which plant to get, Russian sage might be a better option.

There are, of course, also some similarities between Russian sage and lavender, which is why they can be easily confused.

Both plants are perennials and often would have similarly colored flowers. Not many plants have purple or blue flowers, so often Russian sage (or any purple flowering plant) can be mistaken for lavender. It is indeed a common plant that looks like lavender but isn’t.

Both Russian sage and lavender enjoy a similar climate with full sun and well-drained soil. It’s likely that if you have one of these plants growing lush and healthy in your garden, the other one will do well too. You could even plan them side by side to enjoy a longer flowering season as Lavender typically starts blooming before Russian sage.

Both plants are also quite drought-resistant and attract a wide range of butterflies and bees to your garden.

So, as you can see, there are a few key differences between Russian sage and lavender.

The most noticeable difference is the size of the plants, but you can also tell them apart by their flowers, leaves, and aroma.