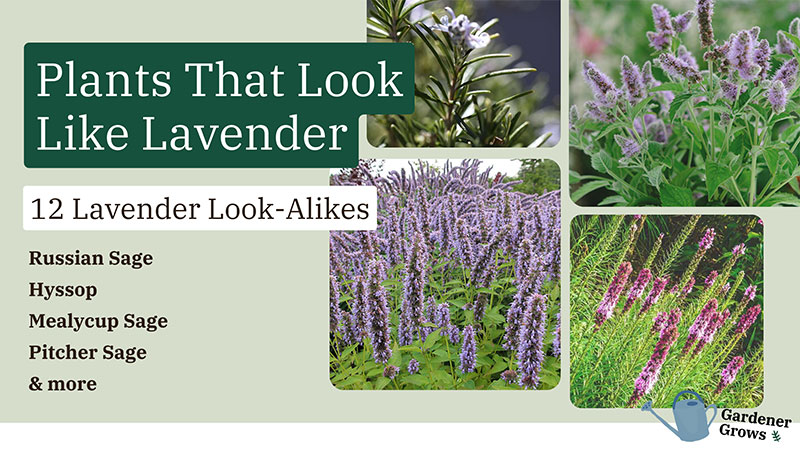 When preparing the article about the differences between Russian Sage and Lavender, I found out that it’s just one of the few plants that look like lavender. There are many more. In fact, I found a dozen plants that share many characteristics with lavender.

Some of these plants are in the same family as lavender (the mint family), while others just happen to share a similar appearance. But all of them would make a great addition to any garden, especially if you’re looking to add a touch of lavender’s unique beauty.

Before diving into all the other plants and purple flowers that look like lavender, let’s take a quick look at what lavender actually looks like. This will help us better understand the similarities between lavender and the other plants on this list.

Lavender is a perennial plant that typically grows to be between one and two feet tall. It has thin, woody stems and small, blue-purple flowers that bloom in the summertime. The leaves of the plant are long and narrow, and they are covered in tiny hairs.

Lavender is native to the Mediterranean region, but it can now be found growing all over the world. It is a popular choice for gardens, as it is relatively easy to care for and it doesn’t require a lot of water.

One of the main characteristics of lavender is its intense, floral scent. This scent is due to the presence of a compound called linalool in the plant’s essential oils. Linalool is also responsible for the plant’s relaxing and stress-relieving effects.

I’ve done a whole separate article on the difference between Russian sage and lavender, so I won’t go into too much detail here. But suffice it to say that these two plants share many similarities, including the most obvious ones – their blue-purple flowers and aromatic leaves.

Russian Sage (Perovskia atriplicifolia) is a little bit taller than lavender, growing to about 4 feet in height. It’s also a bit hardier, which means it can handle colder temperatures and less water than lavender.

Overall, Russian sage is a great alternative to lavender if you’re looking for something that’s a bit tougher and easier to care for.

There are over 900 species of Salvia, so it’s no surprise that some of them would resemble lavender. Meadow sage (Salvia pratensis) is one of the most lavender-like, with its blue-purple flowers and silvery-green leaves.

Meadow sage grows to about 2-3 feet in height and spreads outwards, making it a good choice for groundcover. It’s also quite drought tolerant, so it’s a good option for dryer climates.

Liatris (Liatris spicata) is a genus of about 40 species of flowering plants, all of which share a similar appearance to lavender. They have tall spikes of purple, pink, or white flowers, and long, linear leaves. Their purple flowers that look like lavender blooms make them popular choices for cut flowers. Especially as the blooms can last for up to two weeks in a vase.

Most Liatris species grow to be about 3-5 feet tall, although some can reach up to 6 feet. They’re also quite easy to care for, and can tolerate a wide range of growing conditions.

Hyssop (Hyssopus officinalis) is another surprising plant that looks like lavender. It’s a member of the mint family, and its leaves have a similar shape to lavender leaves. It also has long spikes of blue or purple flowers, although the flowers are a bit smaller than those of lavender. Still, their resemblance is close enough that hyssop makes a great lavender alternative.

Hyssop is native to the Mediterranean, and it has a long history of use in herbal medicine. It’s also a popular choice for cooking, as its flavor is similar to that of anise.

Catnip (Nepeta cataria) is a member of the mint family, and it shares many similarities with lavender. It has long, thin leaves that are covered in tiny hairs, and it produces small purple flowers. It also has a strong, aromatic scent that is due to the presence of a compound called nepetalactone. That’s also the compound that makes catnip so appealing to cats!

Compared to lavender, catnip is a bit taller, growing to about 3 feet in height. Also, if you look at the flowers closely, you’ll notice that they have a different shape. But overall, Catnip still deserves a spot on the list of purple flowers that look like lavender.

Lupine (Lupinus polyphyllus) is a tall, showy plant that’s native to North America. It has long, thin leaves and produces spikes of blue, purple, or white flowers. Lupine flowers are much bigger than those of lavender, but they share the same unique color and shape. This makes lupine a gorgeous alternative if you’re looking for purple flowers that look like lavender.

Lupine grows to be about 2-3 feet tall, and it prefers full sun and well-drained soil. It’s a beautiful plant, but it can be somewhat toxic to animals if ingested.

Pitcher sage (Salvia azurea) is another member of the mint family that looks a lot like lavender. It has long, thin leaves and produces small blue or purple flowers. The flowers are arranged in a tight cluster, similar to the way they are on lavender plants.

Pitcher sage is native to the United States, and it’s often used as an ornamental plant. It grows to be about 2-3 feet tall, and it prefers full sun and well-drained soil.

Yet another type of sage that looks a lot like lavender is Mexican bush sage (Salvia leucantha). It’s native to Mexico (as you might be able to tell from its name) and Central America, and it has long, thin leaves and spikes of purple flowers. The flowers of Mexican bush sage are a bit larger than those of lavender, but they still have that signature lavender look.

Mexican bush sage grows to be about 3-4 feet tall, and is a great option if you’re looking for a bush that looks like lavender. It’s also quite easy to care for, and it’s drought tolerant.

I have to tell you that when I was a kid, I used to think that rosemary (Salvia rosmarinus) and lavender were the same plant! They do look quite similar, especially when they’re in bloom. Both have a very strong, signature smell, and they both have thin, needle-like leaves. The flowers of lavender and rosemary are also quite similar, although the shape of the lavender flowers is a bit more delicate.

Compared to lavender, rosemary is a bit taller, growing to about 4-6 feet in height. Of course, the smell of rosemary is quite different from that of lavender. But if you’re looking for a plant with a similar appearance and strong aroma, there probably isn’t a better lavender look alike.

While not everyone would consider basil as a plant that looks like lavender, these two plants undoubtedly share some similarities. Particularly basil flowers look like lavender – they are small, delicate, purple and white flowers that grow in clusters.

Basil (Ocimum basilicum) is a member of the mint family, and it’s a popular choice for cooking. It has a strong, pungent smell, and its flavor is quite unique. Basil leaves are also quite different from lavender leaves, being much larger and more aromatic.

Mealycup sage (Salvia farinacea) is yet another type of sage that looks a lot like lavender. It’s native to the southeastern United States, and it has long, thin leaves and spikes of small, blue or purple flowers. Mealycup sage grows to be about 2-3 feet tall, and it’s often used as an ornamental plant. It prefers full sun and well-drained soil, and is quite easy to care for.

You can tell mealycup sage apart from lavender by its hairy leaves and flowers. Also, the flowers of mealycup sage are also a bit smaller than those of lavender.

While not an exact lavender look alike, wisteria (Wisteria sinensis) is one gorgeous plant! If you’re looking for a plant with purple flowers that look like lavender, wisteria is definitely worth considering. It has long, hanging clusters of delicate, purple flowers, and its smell is absolutely intoxicating.

Wisteria is a bit of a climbing plant, and it can grow to be quite large. It’s native to China, and it’s often used as an ornamental plant. Wisteria prefers full sun and well-drained soil, and it can be a bit difficult to care for. But if you’re up for the challenge, wisteria is a plant that will definitely make your garden stand out.

There are a number of plants that look like lavender. While nothing compares to the soothing, calming smell of lavender, these plants make for a great alternative if you’re looking for something similar look-wise. Mexican bush sage, rosemary, basil, mealycup sage, and wisteria are all great options to consider. So take your pick and enjoy the beauty and gorgeous purple flowers of these lavender look-alikes.